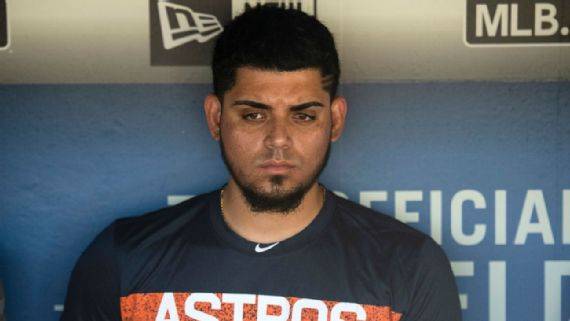 Houston Astros manager AJ Hinch said he started the long-awaited meeting on Sunday by addressing Roberto Osuna and speaking briefly with him in front of the team. I wanted to tell him how lucky he was to "join this culture, this clubhouse, this collection of guys who are sitting in the living room and I think they are second to none."

Then he gave Osuna the apartment for what amounted to approximately 10 minutes.

According to the players at the closed-door meeting, Osuna apologized for the distraction caused by his domestic assault charge. He told his new teammates how grateful he is for another chance to pitch and do it with the defending World Series champions. He declined to provide details about the incident that led to a 75-game suspension under Major League Baseball's domestic violence policy, a position he held during a 25-minute interview inside the Dodger Stadium visiting dugout shortly thereafter.

"Not at this time," Osuna said, in Spanish, when asked to provide details about what led to his arrest on May 8 in Toronto, citing an ongoing legal matter.

Osuna faces a court date on September 5. His lawyer, Domenic Basile, has pleaded not guilty on behalf of Osuna and is reportedly seeking a peace bond that will essentially drop the charges in exchange for good behavior.

The Astros acquired Osuna on Monday in exchange for three pitchers, most notably former closer Ken Giles, and will eventually turn to him in the ninth inning. The 23-year-old Mexican right-hander finished serving his suspension Sunday morning and was added to the active roster, with starting pitcher Lance McCullers on the 10-day disabled list as he examines his throwing elbow.

Osuna said he was not "surprised" that the Toronto Blue Jays left him behind, adding: "I was very happy when I found out that I had been traded to the Astros." His new teammates "treated me well," Osuna said in Spanish. "I felt like part of the team."

As for what they have been these past few months?

"I'm trying to get the positive out of this," said Osuna. "I have prepared well in all this time that I have been inactive, and I am very happy to be able to play baseball again."

Owner Jim Crane and General Manager Jeff Luhnow met the team separately on Saturday. They wanted to review the background checks they conducted on Osuna and explain why they felt comfortable bringing it in. Luhnow came out believing that his players were "grateful" for the conversation.

"It was not an easy decision for us to become an organization," said Luhnow, "but based on all the information we have, we believe Roberto deserves a second chance. Jim and I communicate that to the players. The player will have to make up his mind by himself over time. I think Roberto is off to a good start. He met everyone today. And I think our clubhouse will give him a chance to be a part of this team. Help us win. "

Luhnow added that he is not "concerned" about the Osuna acquisition "fragmenting the clubhouse," a sentiment in which his players and manager stood firm throughout the weekend.

Luhnow, who was born and raised in Mexico City and has been following Osuna since he was a teenage phenomenon in his home country, mentioned the possibility that Osuna would talk to minor league players about his experience and get involved in community work. In Houston. Osuna said she would do whatever they asked her to do.

"Although there has been a lot of negativity about it," said Luhnow, "I finally believe that in the long run, we can make this a very positive event for our team, for Roberto personally, for everyone else who was affected, and for the community of Houston and our fan base. "

Luh covered himself when asked if he could uncover details about the pending legal matter, saying that "due process is justified" and that the club "is going to let it develop."

As part of a 346-word statement released Sunday, the Astros said the decision to acquire Osuna "was based on the entirety of the information we gathered during our extensive evaluation. That included as much information as we were able to gather about the specific incident and the charges were brought, but they also included as much information as we could gather about his actions before and after the incident, as well as his personal reputation among his former com