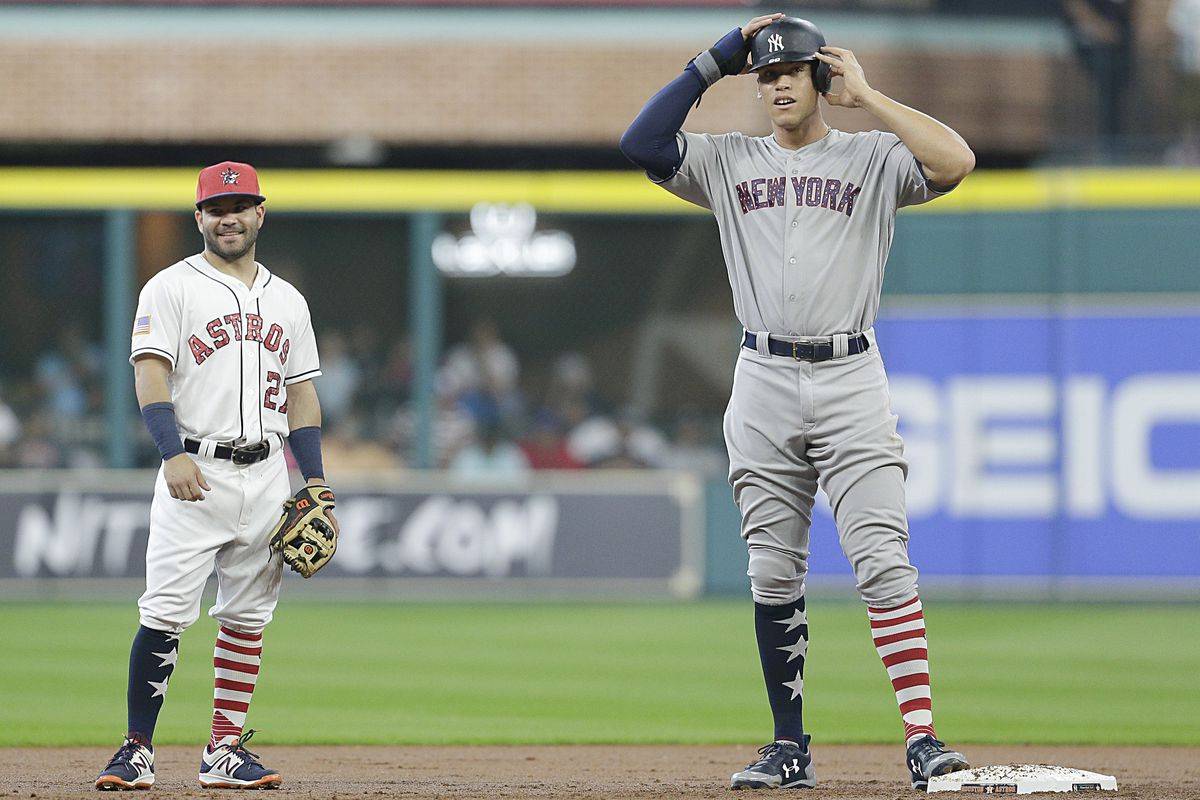 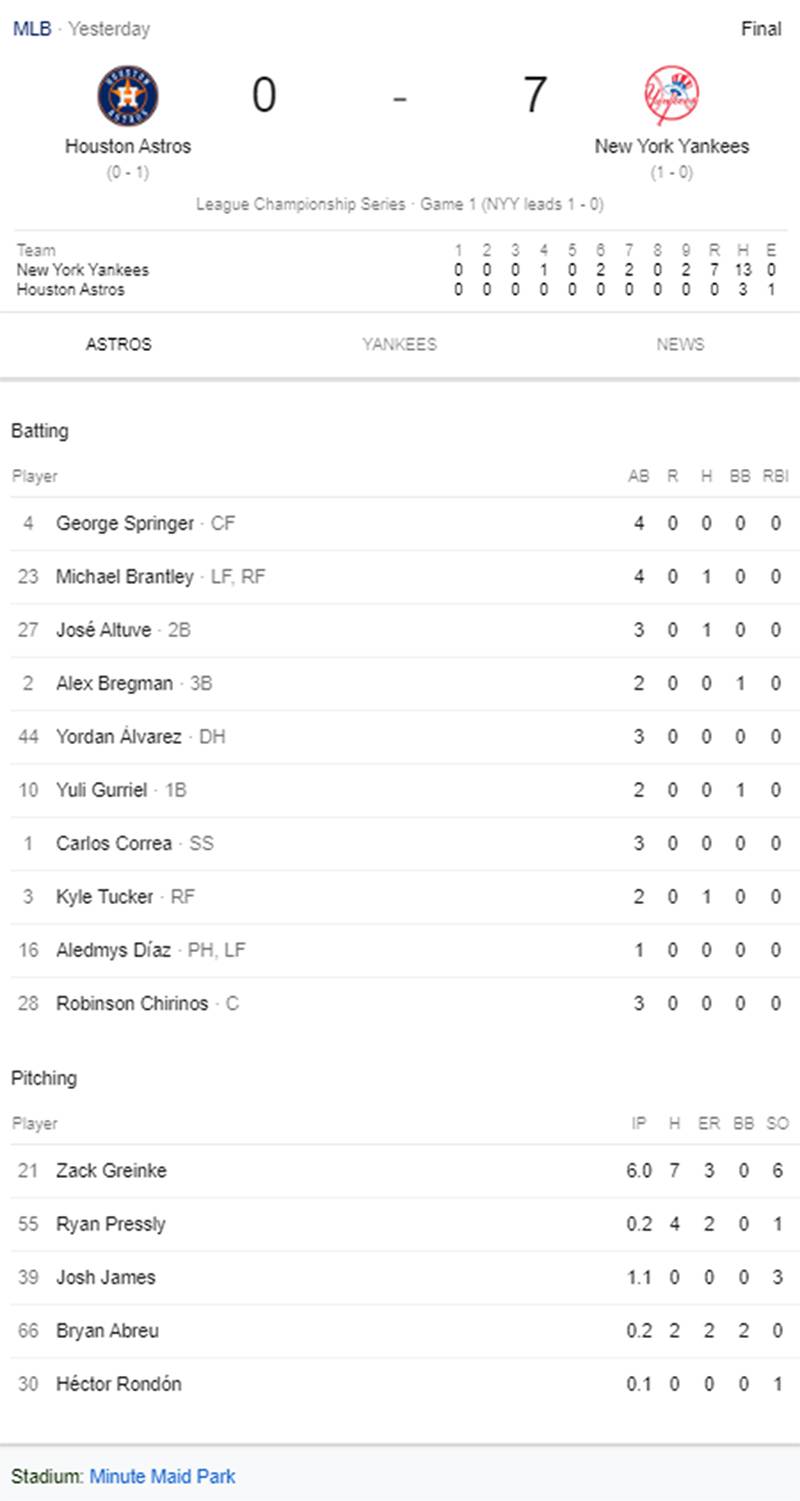 Masahiro Tanaka threw 68 pitches in six innings, allowing just one hit and dominating Houston's offense. Because of that, the instinctive response when Adam Ottavino trotted out of the bullpen to start the seventh could have been outrageous. But a simple fact made it right: Opponents have a .387 wOBA (base-weighted average) against Tanaka for the third time in this year's lineup, which was where the Astros met after six. In simple terms, that means Aaron Boone has seen Tanaka fall apart all season at that point in the game. There was a large sample size suggesting that the fight is coming. Boone was not going to allow it to happen in a playoff game. "He was getting tired," said Boone. "And the ball slipped a little there in the last inning. So I considered sending it back but then decided not to." Towards the end of the regular season, I cornered Boone in the tunnel leading to the Yankees' shelter at Tropicana Field and asked him how difficult it would be in October to remove the initial pitchers while they were still sailing. He shrugged and said, "This is how the game works now." The manager could not have been more clear. That was always how I was going to play it. Early hitching at Tanaka was fully expected. Of course, we understand why it would be jarring for the viewer, who is conditioned to expect a different strategy. Our eyes and guts are used to seeing a pitcher start work, the pitching coach calls the bullpen, the catcher stops as the reliever warms up, the whole grind. The teams are now asking their fans to trust a completely transformed process. It usually works, and one day it won't be that surprising. The Yankees have already trained their players to see this coming. "Right now I don't think you really consider the number of pitches that much," Tanaka said. "It wasn't a big surprise to me to be retired after the sixth inning." Gleyber Torres Still Hot What about Gleyber Torres, other than that he stays warm, pitches and punishes mistakes, and emerges as a generational talent at the best possible time for his team? Torres' sixth-inning home run came on an aggressive first-pitch swing with Zack Greinke's fastball: 91 mph and just over the plate. In the next inning, he worked a full count before hitting a curved ball for a two-run single. Torres led five races in the game. "[He is] smart," Boone said. "Confident. And when you have talent, it's a really good combination. He's always had it since he came to the big leagues and he just plays the game easily and for free and with confidence in his game. And I think he's the part of Intelligence is great because it has allowed him to continue growing and improving in all the little things. " Stanton Takes Two Sliders Giancarlo Stanton's main offensive weakness is chasing down low, far balls, often sliders. He's been working on that lately, which he noticed during the ALCS training day on Friday. "Try not to chase and really stay in your zone," he said. This focus was evident on Stanton's four walks in the division series, and made possible what the Yankees hope will be a great home run on Saturday. Facing a 0-2 count in the sixth inning against Zack Greinke, Stanton did exactly that: a restraint that eluded him during last year's division series loss to Boston. On this at-bat, he took a 0-2 slider and a 2-2 slider, before driving a fastball over the wall in the center right for his first home run this postseason. When asked after the game if he had thrown pitches he would have chased last year against Boston, Stanton nodded and smiled. "Yes, yes," he said. "You learn." Bregman's Stumble The Yankees' strong defense provided many highlights, including several firsts from DJ LeMahieu at first. But the highlight came in the fifth, courtesy of Aaron Judge. After Alex Bregman walked, Yordan Alvarez flied out to right center. As Judge ran him, an apparently surprised Bregman, who was almost at second base, had to quickly return to first. Bregman stumbled, allowing Judge's elite arm as long as he needed to pitch first for a key double play. When the judge hit in the next inning, a woman in the stands yelled at her, "You are a terrible person!" We guess she was joking, but maybe she was just so upset. Tanaka slider Tanaka made extensive and effective use of his slider in this game.